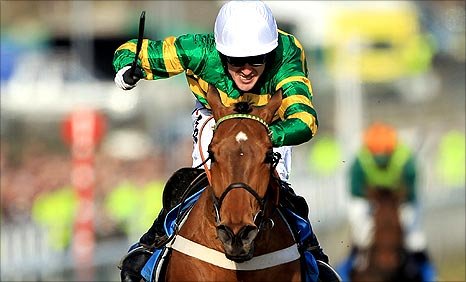 Tony McCoy rode 30 Cheltenham Festival winners – only Ruby Walsh and Barry Geraghty have ridden more. He has been leading rider at the 1997 and 1998 meetings. He was inducted to the official Cheltenham Hall of Fame on 18th November 2012.

Tony has won all of the feature races except the World Hurdle. He won the Gold Cup in 1997 on Mr Mulligan and in 2012 on Synchronised.  The Champion Hurdle has come his way on three occasions and with three different trainers (Make a Stand 1997, Martin Pipe, Brave Inca 2006, Colm Murphy, Binocular 2010 Nicky Henderson). He also has won the Arkle on three occasions – all on Martin Pipe trained horses.

In recent seasons Johnjo O’Neill has been Tony McCoy’s main source of winners with Albertas Run and Wichita Lineman having dual success. Albertas Run just missed out on a hat trick in the Ryanair Chase in 2012.