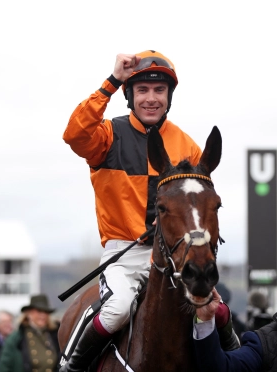 Put The Kettle On proved a 16/1 winner of the G1 Racing Post Arkle Challenge Trophy for trainer Henry De Bromhead and owners the Dermody family of County Kilkenny.

Their mare, who was ridden by Aidan Coleman, won by one and a half lengths from Fakir D’oudairies (3/1), with Rouge Vif (9/1) another 18 lengths back in third. The unplaced 5/2 favourite was Notebook, a stablemate of the winning mare.

De Bromhead said of Put The Kettle On, the first mare to win the ‘Arkle’ since Anaglogs Daughter in 1980: “I’m delighted, especially for the Dermody family, and Mary Dermody who is such a good owner. Aidan rode her brilliantly and said she attacked every fence, and she had the course-and-distance form from last year [she won the G2 Racing Post Arkle Trial at The November Meeting] so wasn’t to be underestimated.

“Notebook was our more fancied runner, but this mare keeps improving. For a mare that won a 116 beginners’ chase at Kilbeggan she’s come a long way. She had been busy all last summer and then topped it off with victory here in November, so we said we would back off her, give her a break and then come here. We thought about the novices’ handicap chase at the end of today over two and a half miles, but felt two miles would suit and opted for this race. She seems to handle any ground and Aidan said she loved this ground.

“Notebook was disappointing, and I just noticed that when Cash Back dropped out we dropped out too. It crossed my mind that they had a tough race together in the Irish Arkle at Leopardstown. Notebook’s best form is on better ground, and while we were a bit unlucky with the delayed start he behaved very well.”

Mary Dermody, who was at the racecourse with her sons John and Michael, explained the mare’s name by saying: “It’s just something that is commonly said at home. People come to visit and we say, ‘put the kettle on’. We chose Henry to train for us because he is a winner. I’ve always liked horses and we’ve bred a few, but we’ve never had one as good as this.”

Her son, Michael said: “We drink a lot of tea at home! Henry has done a fantastic job but we didn’t think we would end up here at The Festival. She was under the radar, but we were confident she would run a big race.”

The Dermodys bought their mare for €20,000 as an unbroken three-year-old. De Bromhead said: “Every horse Mary has is mad, and that includes another mare we had before that who was as mad as a hatter. This mare was prancing around at Goffs [the bloodstock sales company] and standing up on her hind legs, and my wife Heather and I looked at each other and said, ‘That’s the mare for Mary!'”

Put The Kettle On Warms Up Cheltenham

Aidan Coleman warmed up for his ride aboard hot favourite Paisley Park in Thursday’s G1 Paddy Power Stayers’ Hurdle with success aboard 16/1 chance Put The Kettle On in the £175,000 G1 Racing Post Arkle Novices’ Chase.

Trained by Henry De Bromhead, the six-year-old, one of two mares in the line-up, jumped for fun throughout the two-mile contest and ran on strongly in the closing stages to record a length and a half success, becoming the first mare to success in the contest since Anaglogs Daughter in 1980.

Joseph O’Brien’s Fakir D’oudairies (3/1) was second, with a further 18 lengths back to the Harry Whittington-trained Rouge Vif (9/1) in third.

Put The Kettle On is now unbeaten in two starts at Cheltenham having captured the G2 Racing Post Arkle Trophy Trial at The November Meeting in 2019.

Coleman was registering his third winner in total at The Festival™ presented by Magners and said: “She won the Arkle Trial so I suppose she came in here as a bit of a dark horse.

“Put The Kettle on has been expertly trained by Henry as she has not run since November.

“She went through that ground very well and she jumped exceptionally out of the ground for quite a small mare. It’s super to win the race.

“The whole way, I was absolutely having some craic. Turning in, I was going to be sick if I had got beaten because she is a good mare.

“Turning off the bend, I gave her a kick down to the second last because that is what I did in November, and she absolutely lengthened into the middle of it. I thought ‘Brilliant, we are away now” and then I was praying because, if she got beat, she would have been very unlucky.

“I had faith that this mare was a good mare and I was travelling. If you are riding for Henry de Bromhead, they keep going and I wasn’t going that slow – I was picking up. Her jumping is a joy to behold and it was just brilliant.”

It was time for a celebratory cup of tea as Put The Kettle On (16/1) was something of a surprise winner of the G1 Racing Post Arkle Challenge Trophy Novices’ Chase on the opening day of the The Festival™ presented by Magners 2020.

Perhaps not a surprise if you saw her win the Racing Post-sponsored G2 Arkle Trophy Trial Novices’ Chase here in November, and Henry de Bromhead cannily kept his charge fresh for this since that victory 114 days ago.

The six-year-old was made to fight hard by the runner-up, Fakir D’oudairies (3/1), who is trained by Joseph O’Brien. He said: “My horse has run very well. I think he did well to stand up after his mistake at the second last.”

Mark Walsh rode the second-placed horse – who was beaten a length and a half – for owner JP McManus. Walsh said: “We ran a cracker. The second-last [mistake] probably cost me, I lost a lot of momentum there. I knew it would be a struggle to get past the winner after that.”

Rouge Vif ‘will be better on better ground’

Rouge Vif’s third place at 9/1 in the G1 Racing Post Arkle Novices’ Chase delighted his trainer Harry Whittington, who said: “Third probably is the best we could finish on this ground, because he is better on better ground. It is Soft, Heavy in places and that is not his preferred going. It’s just interesting that the winner [Put The Kettle On] is the mare who beat us all here in November and hasn’t been seen since. It’s a surprise that she was 16/1.

“We’re delighted with Rouge and we know he is better on better ground. He’s given everything today and we’re very proud of him.”

Sheehan said: “I was delighted with my horse. He didn’t like the ground and it was tough work for him. He was gutsy, though, and he jumped class for me. I got a great spin off him in a top race.”

Fourth, a head behind Rouge Vif, was 33/1 chance Global Citizen, trained by Ben Pauling and ridden by David Bass.

Pauling said: “It never really worked from the get-go – he was last when we wanted to be first, but he’s shown a different side to him today. He’s settled in behind and he’s had to do it the hard way. Fair play to him, he’s run an absolute blinder. To settle off the pace like that was great, and you couldn’t ask for any more.”

Bass said: “He’s run a cracker. I ended up last instead of first where I wanted to be, but he’s run ok in the end. I think he’d have a chance at Aintree on better ground.”