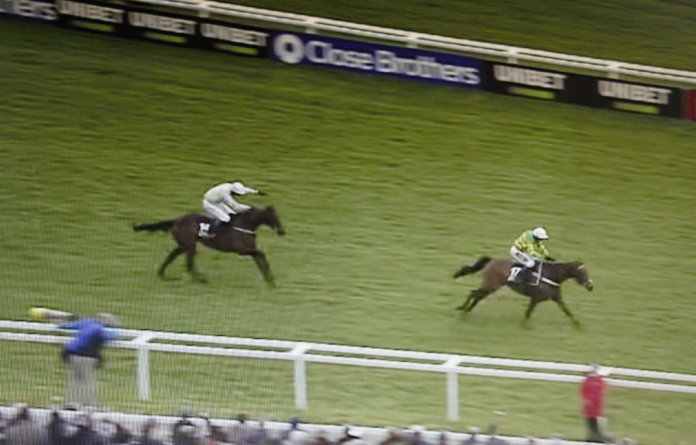 Eight not out for Henderson

Nicky Henderson extended his exceptional record in the G1 Unibet Champion Hurdle to eight when Epatante took the two-mile championship contest under Barry Geraghty, for whom it was a fourth, record-equalling, success in the race.

2/1 favourite Epatante, a six-year-old mare by No Risk At All, is the fifth of her sex to win the Champion Hurdle, and the first since Annie Power in 2016. She beat the Willie Mullins-trained Sharjah by three lengths.

“She was always travelling and you were always quite pleased with where she was. Barry gave her a beautiful ride. He always just had it covered and she has the gears.

“I was worried a bit after last year, when she didn’t run well in the mares’ novice hurdle, and she fell to pieces afterwards. She went home to [owner J P McManus’s stud] Martinstown – I sent her there looking awful and she came back looking fantastic, a million dollars

“We have been very lucky to have those sort of good horses. J P should have had last year’s winner in the race [Espoir D’Allen] and [2017 and 2018 winner] Buveur D’Air, who is back at Martinstown with a hole in his foot, so this would have been his third string.

“She’s as good as she looked the only two times she’s run this year. The big worry was when she came here last year and I thought she’d win, and she didn’t show up. Sophie Candy rides her every single day of the year, and she deserves great credit.”

It was a ninth success in the race for J P McManus, whose 69th birthday it is today.

Barry Geraghty rode his fourth winner of the G1 Unibet Champion Hurdle when guiding 2/1 favourite Epatante to victory in the great race.

Geraghty, whose success puts him alongside Tim Molony and Ruby Walsh in terms of victories in the hurdlers’ championship, tracked leader Petit Mouchoir down the hill and then asked Epatante to quicken past that horse and third-placed Darver Star (17/2) heading to the final hurdle. She then held the late challenge of second-placed Sharjah (16/1), who she beat by three lengths. There was another three and three-quarters of a length back to Darver Star, who was two and three-quarters of a length ahead of fourth home Cilaos Emery.

Geraghty said of Epatante, who is trained by Nicky Henderson for owner J P McManus, who was celebrating his 69th birthday today: “I thought after riding Chantry House in the first race that the ground would be too slow for her and she would struggle. I was worried about it all week yet every step of the way, she was a dream. We missed one or two just because she was wanting to get on with it and trying to take them on, so I was always trying to keep a lid on her.

“I was a little concerned about the ground and I was hoping and praying all the way through the race that she would keep travelling for me. In fact it was the opposite, and she was taking on hurdles when I was asking her to pop. I needed to cover Darver Star coming down the hill and I was just happy to play her late. She quickened and is just a very smart filly.

“Nicky has done brilliantly with her, as has Sophie Candy, who looks after her. The mare has improved no end since Christmas, but Sophie has waited on her every day. She’s in with her ten days a week! Minding her and minding her, and it’s that love and care and attention to detail which makes a difference. There is no better trainer of a Champion Hurdler or any Cheltenham winner than Nicky Henderson – he is unbelievable.”

Epatante was unplaced in the G2 novice mares’ hurdle at The Festival last year, but Geraghty said: “She got lit up on the day last year, when we put the hood on her. She was keen at Exeter and we just felt that the occasion was going to light her up, so we put the hood on her. She ran with the choke out. We plugged her ears today – she settled lovely yet travelled sweetly. There are always a lot of decisions to be made in the run up to a race and thankfully, they went right, as they can often go wrong.

“JP is sourcing this talent and he supports the game at every level. The birthday cheer he got today reflects what people think of him because he is a top-class man.”

Willie and son Patrick Mullins were both delighted with the performance of Sharjah (16/1) who finished an admirable second to the magnificent Epatante (2/1 favourite) in the £470,250 G1 Unibet Champion Hurdle at Cheltenham Racecourse this afternoon.

Sharjah was held-up towards the back of the field in the early stages of the two-mile contest and made stylish headway in the home straight to look a potential threat to Epatante.

However, Sharjah could not match the winner’s devastating turn of foot, eventually finishing three lengths behind in second.

The Gavin Cromwell-trained Darver Star (17/2) ran well to finish a further three and three-quarter lengths back in third.

Closutton handler Mullins said: “Sharjah has run well and travelled nicely into contention, but came up against a very smart mare.

“Cilaos Emery has run well, but just got tired in the ground.”

Patrick Mullins said of Sharjah: “He’s run a cracker. They went very hard up front. Down the back, he wasn’t really travelling but once they started to stop, he passed a few and was enjoying himself.

“Sharjah just levelled out up the hill and I would like another go on good ground.”

Darver still a Star for enthusiastic bunch of owners

There was only one horse that mattered in the G1 Unibet Champion Hurdle, as Epatante (2/1) was an impressive three-length winner for perennial victors Nicky Henderson, JP McManus and Barry Geraghty.

Sharjah (16/1) briefly threatened on the run to the last hurdle, and Darver Star (17/2) ran with huge credit for his thrilled group of owners, The Number Twenty Two Syndicate.

Their eight-year-old has improved steadily throughout the season and was in there fighting approaching the last, but had nothing left when the first two went past.

Darver Star is trained by Gavin Cromwell – who won the 2019 Unibet Champion Hurdle with Espoir D’Allen. He said: “Delighted with the run – he’s run a cracker and the mare was very good.

“He was probably going as quick at the line as he was in any other part of the race, so he probably wants two and a half miles now. I suppose the G1 Aintree Hurdle would be the race for him – we’ll see how he comes out of this.”

Jonathan Moore rode the third-placed Darver Star, and said: “My lad wears his heart on his sleeve, he was just beaten by two quicker horses up the hill. He tried his heart out for me and he’s run a stormer.”