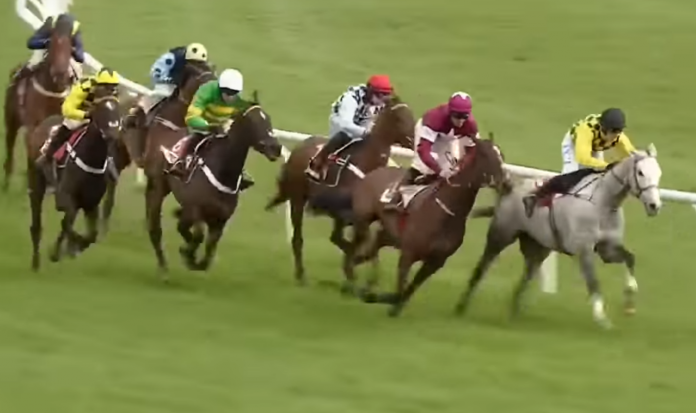 The Nicky Henderson-trained Shishkin made it three victories for four starts over hurdles with a thrilling victory in the £125,000 G1 Sky Bet Supreme Novices’ Hurdle.

Ridden by Nico de Boinville, the 6/1 shot stayed on strongly up the Cheltenham hill to eventually get the better of an engaging battle with the Gordon Elliott-trained Abacadabras (11/4), to register a head success in the two-mile opener to The Festival™ presented by Magners. Shishkin’s stable companion Chantry House (15/2) was a further 11 lengths back in third.

Seven Barrows maestro Henderson, drew level with Willie Mullins as the most successful trainer ever at The Festival with his 65th victory.

“Chantry House has run a great race and both he and Shishkin are two gorgeous horses for the future. We have a lot to look forward. They have won point-to-points and I would think chasing is where we will go.

“We say it every year that something will come up and bite you, and sadly it was Altior that has had to stay at home. He is one of the more powerful shots but this was great and all of our horses have run well.”

Nico de Boinville, winner of the Holland Cooper Leading Jockey Award in 2019, got the 2020 meeting off to a flying start by taking the G1 Sky Bet Supreme Novices’ Hurdle aboard Shishkin. It was de Boinville’s second victory in the opening race of The Festival – he also won it in 2016 with dual Betway Queen Mother Champion Chase hero Altior – and his second for trainer Nicky Henderson.

Six-year-old Shishkin, a son of Sholokhov owned by Marie Donnelly, beat the Gordon Elliott-trained Abacadabras (Davy Russell) by a head at 6/1 in a thrilling photo-finish.

De Boinville said: ” It wasn’t a very nice experience, if I am honest. It was never ideal. These false starts aren’t easy to handle; it’s very hard to get a position exactly where you want to be. But then we got a nice position and then going down to that downhill hurdle he’s just had a grab at it and I’ve landed on all fours, really. From then on down the back it is really hard work – I’d say it is almost on the heavy side. It rode like that on him, anyway. It was a very rough race. I got shuffled back; I got switched out wide just to try to get him travelling, give him a bit of light and a bit of comfort in himself. Then the horse fell in front of me and nearly knocked me over. Then it was just a case of trying to pick up the pieces. Everything that could go wrong did go wrong. It just shows what a fantastic horse this is going forward. He has got so much ability. He is so talented. He has tremendous gears and got out of an awful lot of trouble. Wherever he goes next season, it might be that we’ve found another really good one.

“That was his first time in a big field like that and in this ground as well. It was just a case of finding where and when you could travel. I pulled him out down the hill and it has taken a bit of light to get him come on the bridle again, and then he has taken me into the straight. It was a very good race and I think plenty will come out of it. It thought that was a super run, considering, and that he showed a bit of superstar quality.

“Everything conspired against him today, but he managed to find a way, and that’s what good horses tend to do. They get themselves out of a hole, and they get their jockey looking a bit better than they might do otherwise.

“It’s a big relief, obviously with the disappointment of Altior being out [of the Betway Queen Mother Champion Chase, having aggravated a splint] tomorrow. It was probably on the cards and the boss told me gently. The horse comes first; horse welfare is paramount and we’ve got to look after the great boy as he is. It’s great to get on the board and I am delighted. It’s great for the boss and great for the team at home.

“If I’m honest, I think with another summer’s grass Shishkin will grow another hand and fill out as well, so it’s similar to how Altior was. I’m not going to say he is like Altior, but they make that decision for you over the summer. Come September I expect to see a fuller horse, because he’s still quite raw.”

A thrilling opener to The Festival™ presented by Magners saw Shishkin defeat Abacadabras in a head-bobbing finish to the G1 Sky Bet Supreme Novices’ Hurdle.

Shiskhin (6/1) beat Abacadabras (11/4) by a head, with Chantry House (15/2) third beaten 11 lengths. The 9/4 favourite Asterion Forlonge, who made much of the running but jumped right at a number of hurdles, finished fourth. The fall of Elixir D’Ainay at the second-last hurdle when in contention also resulted in Captain Guinness being brought down, and both the winner and runner-up suffered some interference in the melee.

Despite that Davy Russell was making no excuses for the defeat of Abacadabras. Russell said: “He ran a blinder, but a better horse won. He travelled well, jumped well and did everything fantastic.

“The winner made a bad mistake down the back and people have said he would have been unlucky to lose. I was hampered by the faller [at the second-last] but not as much as the winner.”

Gordon Elliott, the trainer of Abacadabras, said: “He ran a great race, and while it is disappointing to lose out, he was only beaten a head. The way the race worked out he was left in front a bit too soon, but he jumped great and didn’t do anything wrong. He was last away from the start, but that’s racing and we’ll keep looking forward.

“The faller definitely cost us a bit of ground, and I couldn’t see how badly the winner was affected, but that’s just the way it goes.

“Our fellow is a very speedy horse and I would think he will stay over hurdles next season – he could be a [Unibet] Champion Hurdle horse.”

Placed horses good but not good enough in rough Supreme

A thrilling finish followed a dramatic race for the G1 Sky Bet Supreme Novices’ Hurdle, the opening contest of The Festival™ presented by Magners 2020.

Shishkin (6/1) stayed on best to give Nicky Henderson a 65th Cheltenham Festival winner, beating the Gordon Elliot-trained Abacadabras (11/4) by a neck, following a rough race caused primarily by the front-running Asterion Forlonge (9/4f) jumping consistently to his right throughout the contest. This seemed to cause Elixir D’Ainay to fall at the second last hurdle, as the two bumped in mid-air.

Willie Mullins trained the wayward front-runner and said: “Considering how much ground he lost jumping we were happy to finish in the first four. He has stayed on well really.”

Henderson also trained the third-placed Chantry House (15/2), who was ridden by Barry Geraghty. Two-time Holland Cooper Leading Jockey at The Festival, Geraghty said: “It was a great run and he kept going really well, but the winner was really good. I missed the flight at the top of the hill but that didn’t really make a difference.”

Going after the first

Nico de Boinville, on board the 6/1 winner Shishkin, said: “Soft to heavy ground.”

James Bowen, partner of Allart, said: “It is dead and hard work.”

Tom Cannon, rider of Edwardstone, said: “Soft to heavy. You need to stay.”

Danny Mullins, on board Heaven Help Us, said: “Soft to heavy.”