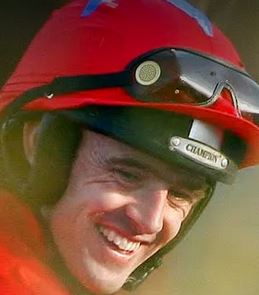 Ruby Walsh is the most successful Cheltenham Festival Jockey of all time.

In a pre Cheltenham 2012 Paddy Power vs Ruby Walsh video, the bookies PR man asked him ” Which race he had not won and would most like to at Cheltenham” ? Ruby didn’t know. Paddy quipped  ” Have you won them all ? “.  As it happens he hasn’t, but he has come close. The only Cheltenham Grade 1 race missing from his big race CV is the Albert Bartlett Novice Hurdle.

Until wrestled from him for one year by Barry Geraghty in 2012, Ruby has pretty much owned the leading rider award at the festival. He notched up an incredible seven winners at the 2009 meeting. Ruby’s  59 Wins have been provided by only four trainers. Willie Mullins and Paul Nicholls provided the bulk with Martin Pipe and Tony Martin chipping in with one each.