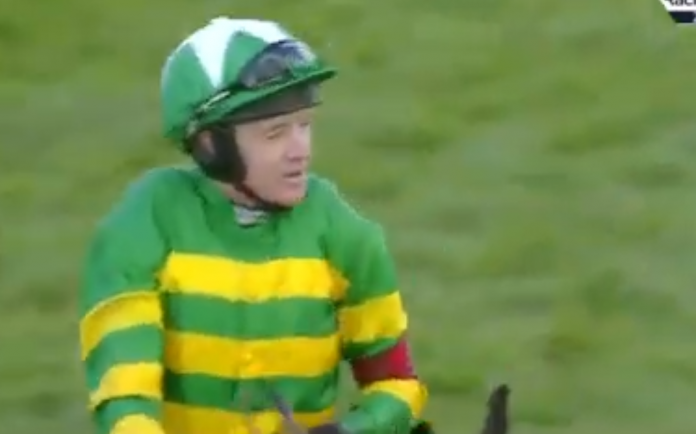 Willie Mullins saddled five of the 24 runners in what looked a typically open Randox Health County Handicap Hurdle, and after well-backed novice Saint Roi (11/2 favourite, Barry Geraghty) had quickened four and a half lengths clear of Aramon (8/1, Paul Townend) to lead home a one-two-four for the stable he was entitled to reflect upon a job well done.   He said: “All the riders rode very cool races and Barry was fantastic. I told him after Saint Roi’s last bit of work that he had improved a huge amount.   “They all arrived at the second last with fighting chances and you wouldn’t have known which one to back, but Saint Roi had improved the most since his last run. He did what he had shown me at home in his final bit of work.”   Asked if he had been tempted to run Saint Roi in Tuesday’s G1 Sky Bet Supreme Novices’ Hurdle he smiled and replied “no”, before adding: “He’s better than this (level), but he’s handicapped nicely and I thought we had enough ammunition for the Supreme!”   Eventual fourth Buildmeupbuttercup (Danny Mullins) had arrived on the scene seemingly going almost as well as the winner, but the trainer felt the hill and the dead ground might have found her out.   “There will be a big day for her,” he said, “maybe at Punchestown.   “Aramon also found the ground a bit too dead but Paul arrived in the right area at the right time and I think the horse just had too much weight.”

Barry Geraghty – 43rd winner at The Festival and final ride there.

Jockey Barry Geraghty rode his fifth winner at The Festival this week when partnering Saint Roi to a runaway victory in the 24-runner G3 Randox Health County Hurdle. An unexposed five-year-old making just his fourth start and handicap debut, the J P McManus-owned Saint Roi (11/2f) beat his Willie Mullins-trained stablemate Aramon (8/1) by four and a half lengths with Joseph O’Brien’s Embittered (14/1) a head back in third. Buildmeupbuttercup (16/1), who is also trained by Mullins, was a head behind in fourth.   Geraghty, whose win took his score to five in the Holland Cooper Leading Jockey Award for the Ruby Walsh Trophy, was keen to say kind words about his weighing-room colleague, Jamie Moore, who had experienced the misery of a Festival win ripped from his grasp when unseated from Goshen at the final flight in the JCB Triumph Hurdle Trial.   He said: “I felt so desperate for Jamie. I fell at the last on Moscow Flyer in the Champion Chase when he was favourite and it’s just unfortunate. You could come down to the final flight 100 times and have no problem, but the horse [Goshen] caught his front foot with his hind foot which stalled him for that split second and it was just enough to unseat Jamie. He’s a top-class rider and it was cruel luck.”   Of Saint Roi’s win, Geraghty said: “It’s great to be riding winners and this is the place we all want to be, but you need things to go right for you on the day. I had the choice of a few [McManus-owned] runners and could have chosen Rathhill – I felt quite bad deserting Nicky [Henderson] when he’s having such a good run – but there was a good vibe for this horse who was unexposed. It was a punt, but everything’s a punt. “When you hear some news from one more than one place there’s usually truth in the tale.   “I rode him at Willie’s in the autumn and he was a lovely, sweet-travelling type, but to jump as well as he did today when so inexperienced and going at pace was impressive. He flew the first and could have frightened himself, but he was up for the game.   “Time will tell how good he could be, but I would say he is a horse with a future.”

Another day for Aramon   Willie Mullins trained the 1-2-4 in the £100,000 Randox Health County Hurdle following 11/2 favourite Saint Roi’s impressive four and a half-length win under Barry Geraghty.   Jockey Paul Townend was delighted with the performance of stablemate Aramon (8/1) who stayed on strongly to take second.   He said: “Aramon ran a cracker, giving a lot of weight to a lot of horses.”   The Joseph O’Brien-trained Embittered (14/1) was a further head behind in third and his rider J J Slevin commented: “He has run a great race with a lot of weight (11st 8lb) and I’m delighted with the performance. He just got beat by a well-handicapped rival.”   Buildmeupbuttercup, also trained by Mullins, was a further head behind in fourth.

Gary Moore reflects on Goshen   Sussex trainer Gary Moore reflected on the heartbreak of 5/2 favourite Goshen’s unseat at the final flight in the opening G1 JCB Triumph Hurdle.   With the race at his mercy, Goshen unshipped rider Jamie Moore, leaving Burning Victory to claim success.   Moore said: “It was just bad luck and that is the way it is. Goshen just got it wrong at the last, but these things happen.   “The horse is absolutely fine. He is a proper racehorse and I think he is very good.   “Jamie took it bad and he took a bad kicking, but tomorrow is another day.”