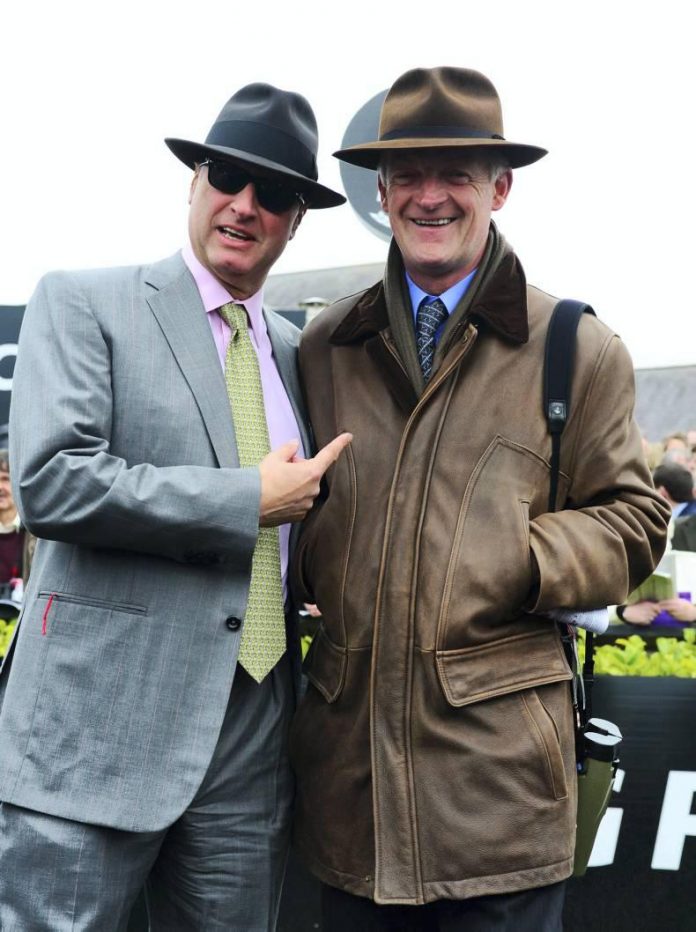 Monkfish is the catch of the day Monkfish (5/1) landed a thrilling £130,630 G1 Albert Bartlett Novices’ Hurdle to provide Closutton maestro Willie Mullins with a 506/1 treble on day four of The Festival™ presented by Magners 2020. Owned by Rich Ricci and ridden by Paul Townend, the six-year-old rallied gamely in the closing stages to deny the Paul Nolan-trained Latest Exhibition (9/2) by a neck, with Gordon Elliott’s Fury Road (5/1) a further nose behind in third.

Mullins had already hit the scoresheet this afternoon with Burning Victory (12/1, G1 JCB Triumph Hurdle) and Saint Roi (11/2 favourite, G3 Randox Health County Hurdle).   He is the leading trainer of all time at The Festival with this being his 71st winner in total.   He said: “Monkfish looks a real chaser. I don’t think the race went according to plan for Paul – he was just doing a little too much for him but he found himself there.   “I thought Paul gave him a fantastic ride to extract him out behind the two horses. I thought that we were settled for third when they passed him after jumping the last but Paul really drove him up the hill. I am delighted for Paul to get a winner in that fashion.

“The first time we ran him, we wondered if he would ever win a race. We were so disappointed – you would swear he was never on a racetrack, he was very green and immature.   “Monkfish is maturing all the time and Paul said that he felt there is still more to come – he said you could feel the power coming when he got after him. He is a huge, big horse but, if he has to come back and win a Stayers’ Hurdle, we won’t complain either.”

Monkfish has ‘wow’ factor for thrilled Rich Ricci   Rich Ricci has had more winners at The Festival ™ than most (17), but he struggled to believe it when Monkfish (5/1, Paul Townend) made light of a serious mistake down the far side and then really put his head down to just get the best of a four-way battle up the hill in the £130,630 G1 Albert Bartlett Novices’ Hurdle.   After Monkfish had got home by a neck and a nose from Latest Exhibition (5/1, Paul Nolan) and Fury Road, with Thyme Hill a close fourth, Ricci said: “That was some performance considering he belted one and was quite keen too. Wowee. I thought we were definitely beat coming into the last 100 yards but he kept finding.   “It was unbelievable. He winged the last, but then they both went by him. He just keeps finding. He’s got a good bit of class and I like him. That was fantastic.”   Paul Townend, completing a 77/1 double after a lucky success on Burning Victory in the opener, has a high opinion of Monkfish and believes he is a horse with a big future.   He said: “He’s a good horse and a nice one to go forward with. He’s a big, raw horse with loads of ability.”

Russell rues that famous Cheltenham hill   “Sometimes that hill isn’t long enough and sometimes it’s too long,” said Davy Russell after finishing a very close third in the G1 Albert Bartlett Novices’ Hurdle aboard Fury Road.   The six-year-old Stowaway gelding, owned by Gigginstown House Stud and trained by Gordon Elliott, was just a nose behind second-placed Latest Exhibition, who in turn was a neck behind the winner Monkfish.   Latest Exhibition was trained by Paul Nolan and ridden by Bryan Cooper, who commented: “Cracking run. Fair play to the lads; it’s just hard to beat Willie [Mullins, trainer of Monkfish] here, isn’t it?”   Nolan said: “It’s great to come and run well. There is a certain amount of pressure off when you come and perform like that. He lost nothing in defeat and we have something to look forward to over fences next year.   “Bryan gave him a super ride and I thought, for a couple of strides after jumping the last, that he might, but Monkfish has put his head down and battled all the way. I am relieved that he ran so well, yet at the same time, disappointed.
“I am delighted that he handled the track and we were a little bit worried during the week as it took him a while to start eating, but he came back and ate the last couple of nights. These are all little fine margins, but he ran very healthy and very well. He has plenty of age on his side and is a decent horse. We look forward to [jumping] fences.”   Fury Road, like Monkfish, was a 5/1 shot, while Latest Exhibition started at odds of 9/1.

Hobbs takes Thyme defeat on the chin   Champion jockey Richard Johnson has completed his rides at The Festival 2020 without a win after 4/1 favourite Thyme Hill had to settle for fourth in the G1 Albert Bartlett Novices’ Hurdle.           Thyme Hill was right in contention running to the last, but became the meat in a lightly-squeezed sandwich as the hurdle approached, and when switched to the outside of those two rivals found another horse hanging in and giving him little room. Despite that trainer Philip Hobbs was not about to declare his horse had been robbed.           Hobbs said: “He suffered some interference, but I wouldn’t say it stopped his momentum, and he suffered a little after the last, but we were beaten and he’s run a fantastic race.   “He definitely stayed all right and kept going right to the line. There wasn’t an issue with that.   “It’s been a frustrating week and we have to take it on the chin. Defi Du Seuil is fine after his run [when 2/5 favourite but only fourth in the Betway Queen Mother Champion Chase]. We found nothing wrong with him so his run is a mystery.   “Sporting John [unplaced in the Ballymore Novices’ Hurdle] was a bit different. He was a bit odd behind after the race as if something was amiss, but he’s come right now.   “You would think that of all the McManus-owned horses at the meeting that Defi would be the one to win, but the horse is fine and that’s the main thing.   “I would imagine we will see Thyme Hill again this season, but he’s not a horse that wants to run every week. Whether Aintree comes too soon we will have to see. He’s big enough to chase but he could well remain as a staying hurdler. It’s a fairly open division and he stays very well.”

J P McManus takes the Bentley Leading Owner Award   JP McManus was recieved the Bentley sponsored award for the leading owner at the 2020 renewal of The Festival which includes the use of a Bentley Flying Spur for a week. The presentation took place after the third race, the G1 Albert Bartlett Novices’ Hurdle.   McManus has had 7 winners so far at the meeting, and could not be caught with four races to go.   McManus took the title last year with five winners, and has now won the award twice since its formal inception in 2017, having taken the honours in 2019 with five winners.   McManus commented: “This is different, I said before [racing] that this feels like a bit of a Rich Ricci kind of a day.”