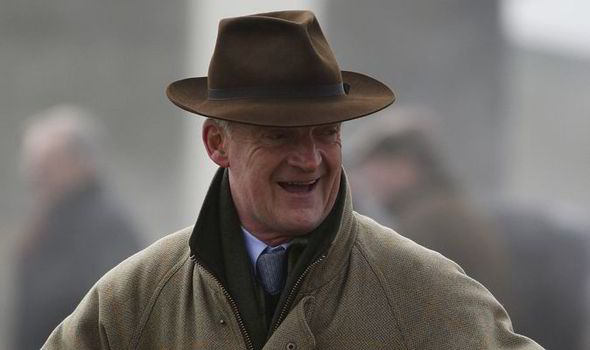 Al Boum Photo (100/30 favourite) became the first back-to-back winner of the £625,000 G1 Magners Cheltenham Gold Cup since Best Mate (2002, 2003 & 2004) with an electric success in Jump Racing’s Blue Riband event.   Ridden by Paul Townend, Al Boum Photo produced a scintillating leap at the final fence and held on gamely in the closing stages to deny the gallant Santini (5/1) to register a neck success in the extended three and a quarter-mile event.   Al Boum Photo, an eight-year-old son of Buck’s Boum also became the first horse since Kauto Star (2007 & 2009) to win the race twice. He enjoyed the same preparation for this year’s race as when he captured the 2019 Magners Cheltenham Gold Cup having won his only other start this in the G3 Savills Chase at Tramore on New Year’s Day.   Mullins is enjoying a special day in the Cotswolds, with this being his fourth winner in succession following the victories of Burning Victory (12/1, G1 JCB Triumph Hurdle), Saint Roi (11/2 favourite, G3 Randox Health County Hurdle) and Monkfish (5/1, G1 Albert Bartlett Novices’ Hurdle). Al Boum Photo’s success allowed Mullins to complete a 2,196/1 four-timer.   The master of Closutton, registering his seventh victory of the week at The Festival™ presented by Magners 2020 and his 72nd victory overall at the meeting said: “We’re delighted to win the race for the second year running with Al Boum Photo.   “We just decided not to break winning formula and just take in the same preparation as he did last year. Don’t break a winning formula when it works and it’s paid off thankfully.   “I thought this year’s Gold Cup wasn’t anything like last year’s. I was just thinking if he had a clear round and a bit of luck then it was all to play for.   “I was happy throughout and Paul was brave on him at the last. Paul’s plan came together and I’m delighted for him as well as Marie and Joe Donnelly, so I am just delighted.   “It’s fantastic and an absolutely unbelievable day. Paul does his own thing and he probably rides better under a little bit of pressure.   “It’s really, really good for him. I am delighted for Paul. To take over from someone like Ruby Walsh – Paul has come and stamped his authority on his season in Ireland riding for our yard.   “It is a tough act to follow, but he is Paul Townend, stable jockey to Willie Mullins and he is top-class – I’m really pleased for him.

“I asked what Paul was going to do and he sort of said what he was going to do. I think the horse just ignored the actions of Paul and he didn’t disappoint the horse – he let the horse do it. That’s a rider riding with huge confidence. It worked out and I am really happy and delighted for Paul.”

Magners Cheltenham Gold Cup press conference quotes Willie Mullins, trainer of the winner Al Boum Photo, said: “I thought he had a great chance. Last year I thought it was a tough race but this time I thought it was winnable with a clear round and anyhow, he won it – just about.   “I came here with a fair bit of confidence and I suppose the light campaign paid off. When you win you are right and I’d imagine he’ll do the same thing next year.   “It’s been an unbelievable day. We didn’t get much luck on Tuesday but we got a huge slice of luck in the first race and then I think in the second, third and fourth races probably the best horse won.   “It’s fantastic to have a guy like Paul Townend riding for you. He had a tough job taking over from Ruby Walsh but I think today proved that he was well up to it.   “I didn’t worry much about the statistics (regarding back-to-back winners) and usually I do, because of the way we had prepared him. I thought that statistically this preparation was going to work, turning it on its head a bit.   “I didn’t see anything all year that I was afraid of at all. I was amazed that everyone was knocking the Champion Hurdle – there wasn’t anything I was afraid of coming here. If the same horse turned up as last year I thought that it would take something we hadn’t seen to beat him.   “I’m very happy with two (Gold Cups) and hopefully we are going to try for three. He loves Cheltenham and we’ll probably take the same route. It wasn’t the plan last year – it was the weather that forced us down to Tramore.   “They are very gracious owners (Marie & Joe Donnelly) and they enjoy their racing. They enjoy the sport of it. They have good days and bad days but they are very gracious. I’m very happy for them.   “I was expecting a lot more from the first two days and it’s tough. People expect us to have winners. We don’t expect to have winners but we hope to have winners. It’s a big story when we don’t have winners but you have to earn them. We just didn’t have the luck on Tuesday.   “I self-medicated a lot that night! It can be hard on the old brain cells but everyone has bad days.   “I’m enjoying this immensely. Last year my son was in an ambulance and I had a horse still out on the track. This year I had nothing to worry about. Real Steel ran a cracker and Kemboy was disappointing, but I just thought the ground didn’t suit him.   “I’m really delighted for my stable jockey who has put his stamp on Cheltenham as our first jockey. An understudy coming in is very tough. Paul has risen to it.”   Paul Townend, rider of the winner Al Boum Photo, said: “Tuesday seems a long time ago now and riding for Willie is the key to that.   “I suppose last year Al Boum Photo was a bit of an unknown. He was proven this year but he had to deliver, and in fairness he did. Willie deserves the credit for being brave enough to go the same route as last year and having him in such good form after just one run.   “We missed a couple of fences but he’s inclined to do that and I was comfortable enough. We were never going to have complete plain sailing but it went as well as possible. He started to jump well at the business end when he needed to and I was in a good position by the top of the hill.   “On paper it was going to be a very different race to last year but it went pretty much as I expected it too. I thought I’d travel better than I was able to last year, the way the race was likely to pan out.   “Last year was completely surreal and I suppose we snuck in under the radar a bit. This year all eyes were on us. It will take a while to sink in. I thought I’d never get a feel like last year again, but this is right up there with it. The best feeling in the world.   “More pressure this year meant possibly better rides. Ruby presented me with the Ruby Walsh Trophy and it was nice to get that too.”